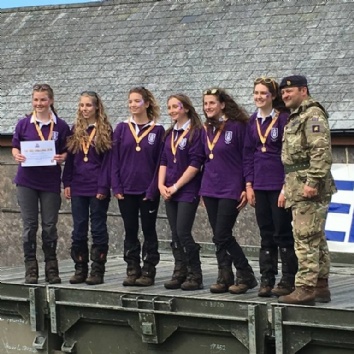 Once again Devonport High School for Girls has teams to be proud of in the Ten Tors event this year.

Working with Coombe Dean School has been a real delight- allowing new friends to be made by both students and staff. Six teams were entered, 2 x 35 mile teams and a 55 mile team from each school, Bella and Alice both stepped forward to walk with Coombe Dean teams to help make up the numbers and all teams successfully completed the event as full teams with no drop outs. The preparations as always started early, and thanks are due to Mrs Benny and Mr Jamieson who gave up their Thursday to help us erect the tents at Okehampton before the event so the camp was ready for the teams to arrive early on Friday morning. There was a large marquee and a cook tent and about 20 smaller tents to erect so everyone was comfortable on Friday night. Shopping followed by bolognaise preparation for about 60 people took place on Friday night, as well as the alternatives for the vegetarians and vegans. Many cakes, biscuits and fruits were also provided as well as bacon, mushrooms and egg rolls for breakfast. Lunches were sorted for the teams for the weekend too.

On Saturday morning the teams were awakened by the loud speakers playing Chariots of Fire at 0430 and students got up, got their feet strapped up at the foot clinic in the marquee if needed, and breakfast was prepared for the teams, with Miss Clatworthy doing a sterling job helping to cook. The time went quickly and before long parents/carers were arriving to see the start and teams assembling for their pre-departure photographs. It is a nervous time as no-one is quite sure what to expect. At 0630 we progressed to the start ready to find our positions behind the markers. This year we were entertained by parachutists coming in to land in the field nearby. It was a beautiful morning with cloud lying in the valleys but the tor tops were clear and visibility was good. After the prayer the canon fired and off they went - streaming across the field and off on their adventures. Staff then rushed off to support the Jubilee Challenge as they set off, then it was back to the marquee for coffee and to begin drying and packing the overnight tents. The progress of the teams was watched on the screens in the Hanger and there were many crossed fingers and hopeful thoughts as we watch them progress throughout the day.

On Sunday morning the marquee was packed up and camp broken as we began to head up to the finish to see the teams in. Coombe Dean 35 team were the first in, then followed by the remaining teams in steady progression. There were many tears shed as they came over the line and it was a real privilege to be part of the event, as it was something students will never forget.

I hope to see some of the 35 teams back next year to make a 45 mile team, and will be recruiting new 35 team members next year a few weeks into the beginning of the term so anyone interested should keep an eye out on the notices. There will be a celebration evening for all students who took part in any part of the training, and their families at Coombe Dean School on June 25th 2018 from 1900 to celebrate the success of the teams, share a slide show of photographs and raise some money for Dartmoor Rescue with cake sales and a raffle. Please see Mrs Anderson if you would like a ticket. I would also like to extend this invitation to any current year 9 students and their families who might be considering joining us out on the moors next year as it will give you an insight into what the event entails. Looking forward to getting out again next year!